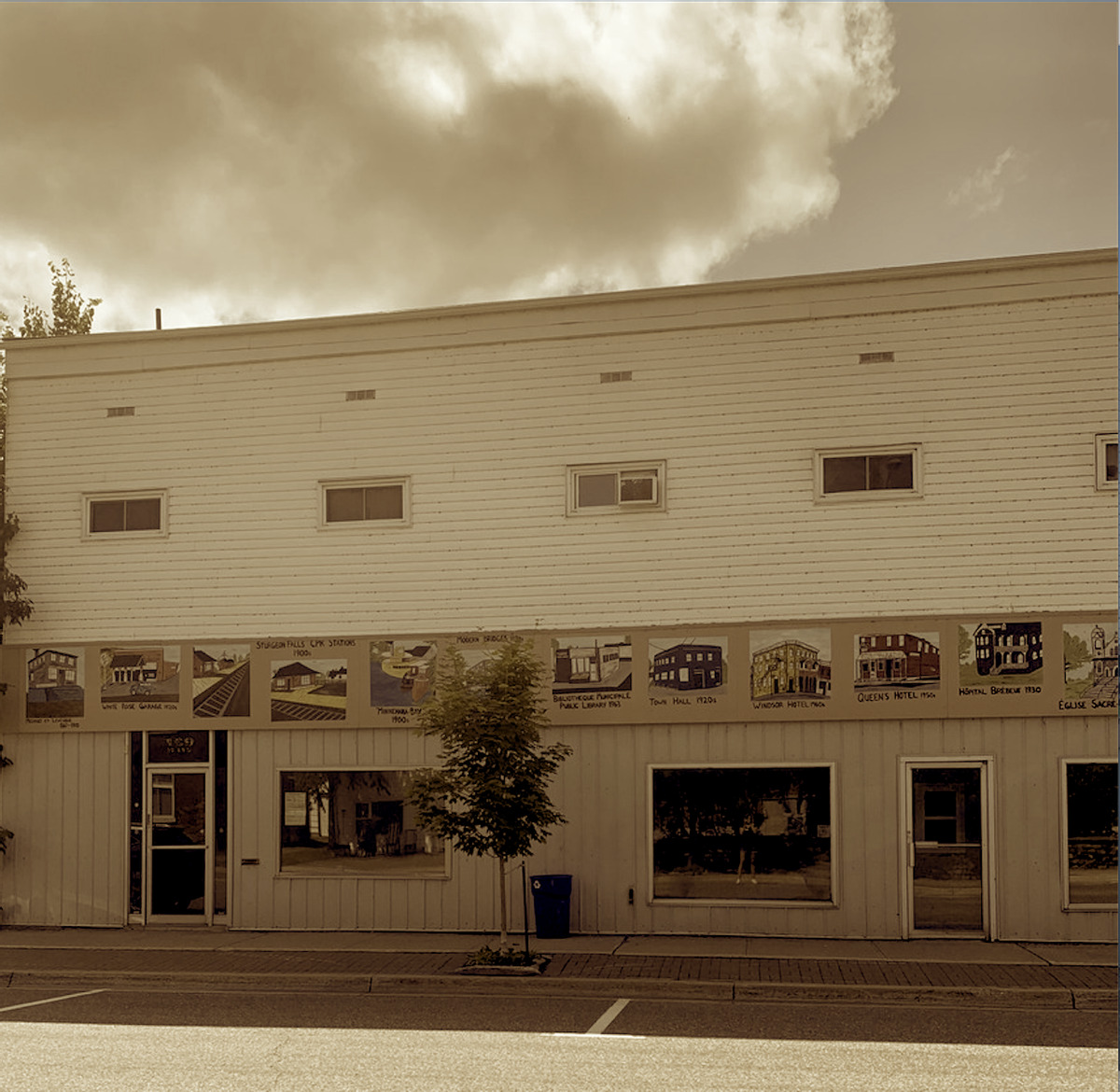 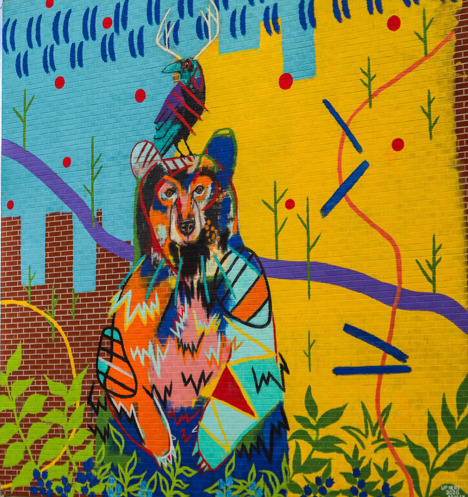 Ashley Guenette is a francophone multidisciplinary artist who spent most of her childhood in Sudbury. A Masters student in the University of Waterloo Fine Arts program, her body of work bounces between colourful and vibrant oil and acrylic paintings and large textile works made from recycled materials.

The Historic Sturgeon Falls mural was Ashley’s first big piece which was soon followed by a large mural dubbed Standing Tall, which she undertook as part of the Up Here Festival in Sudbury.

A town of many names 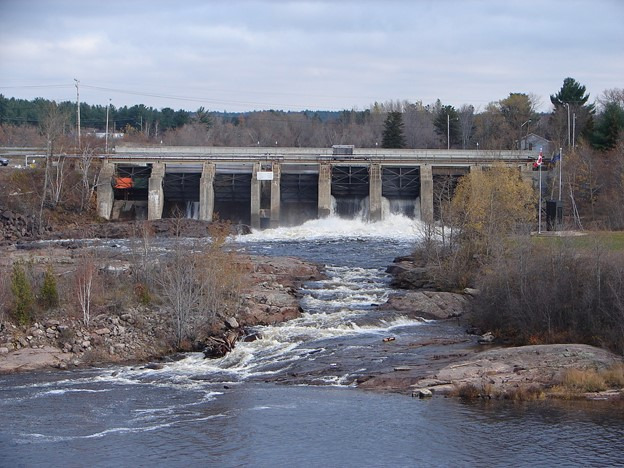 This community of 6,800 residents, which serves as the administrative headquarters for the amalgamated municipality of West Nipissing, has had a variety of names throughout its history thanks to Aboriginal peoples and the arrival of French and English settlers.

Sturgeon Falls, Bawitigong Namé and Nme-Bawting are names that have been used to refer to the town of Sturgeon Falls or to describe the river that runs through the landscape of the area.

Incorporated in the late 1800's, Sturgeon Falls was named after the sturgeon that came up the river in large numbers to breed. The determination and perseverance of this large, pointy-nosed fish are qualities with which the residents who have remained and continue to live in this multi-cultural community identify.

A prime example of this is the resilience to resist linguistic assimilation. Among other things, several generations fought for many years to have Regulation 17 overturned, to educate their children in the French language and to administer their own educational institutions.

When the Municipality of West Nipissing was created through the process of amalgamation in 1999, the leadership insisted on maintaining a designation in both official languages. 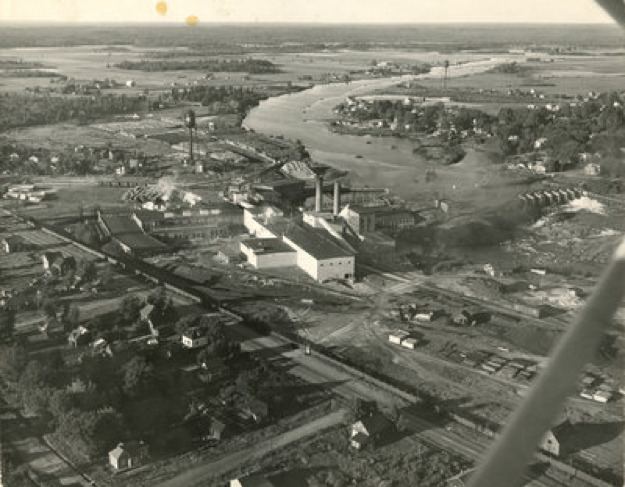 The founding of Sturgeon Falls would not have been possible without the logging industry and the installation of the paper mill in 1894. It was however not until 1912, when the Spanish River Pulp and Paper Company purchased the mill that it became a profitable operation.

Unfortunately, it was inactive from 1929 to 1947, a period that lasted from the Great Depression until almost two years after World War II. The Abitibi Mill reopened in 1947 and by the 1960s, over 600 employees were working there.

In 1991, the Abitibi Mill was sold to a forest industry giant, McMillian Bloedel, who then sold it to the Weyerhaeuser Company. Weyerhaeuser closed the operation permanently on December 6, 2002, ending the employment of 149 people. 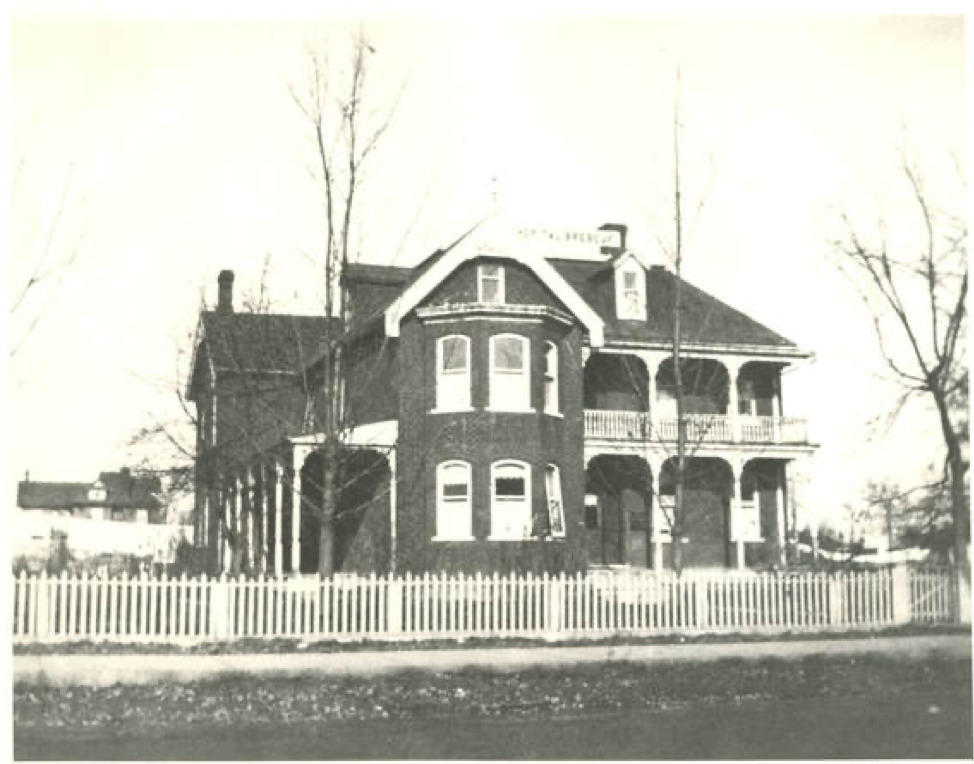 On January 16, 1927, Bishop L'Écuyer informed the Reverend Mother Provincial of the Filles de la Sagesse of his plan to open a hospital in Sturgeon Falls and of his desire to entrust the administration of the hospital to the Sisters.

The Girard house located next to the presbytery was acquired to serve as the hospital. Within a few months of its acquisition, three nun nurses had been employed to care for the sick who numbered between 150 and 250 per year.

In 1930, a third floor was added to the hospital to accommodate the installation of a radiology department which housed the most modern equipment of the time.  The hospital continued to grow adding an obstetrics room, a sterilization room, and a waiting room for the doctors.

In 1951, the Ecole Marie Louise school for nursing assistants, Ontario’s only all-French training centre for registered nursing assistants, was founded. Training 20 to 25 young Franco-Ontarian women each year, the school was located behind the St. Brebeuf hospital.

In 1964, the St-Jean-de-Brébeuf Hospital was refused accreditation by the Canadian Council on Health Facilities Accreditation and the West Nipissing Association of Municipalities took charge of a modern construction project that would better meet the needs.  In 1977, the Brébeuf Hospital bequeathed the estate to a new facility in the northeast of the city: the West Nipissing General Hospital/