The Cultural Crossroads of Yellowknife 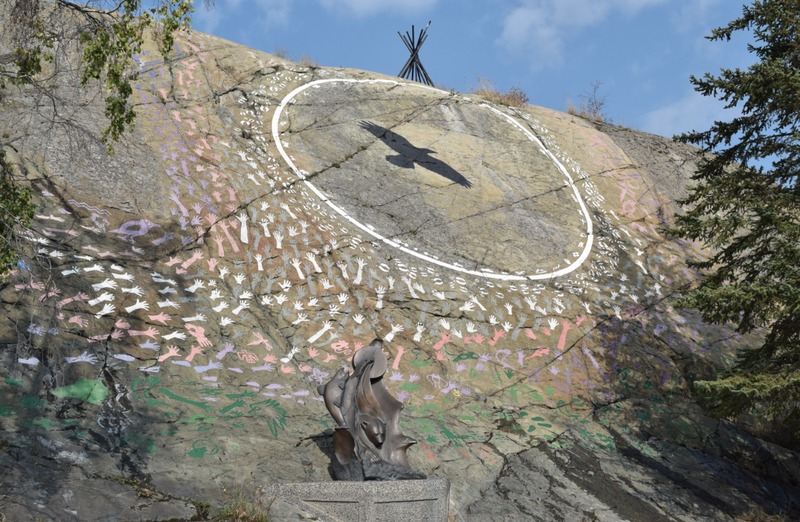 The drum and music signify the universality of language. This music becomes water and waves, and illustrates three elements:

The face of McAvoy Rock also displays a crow with outspread wings. The crow is a mythical figure of the North.

The Cultural Crossroads of Yellowknife

This sculpture also displays 1500 signs and symbols, adorned with children’s drawings and phrases in each of the eleven official languages of the Northwest Territories: Cri, Dogrib, Chipewyan, Gwich'in, Inuktitut/Inuvialuktun/Inuinnaqtun, North Slavey and South Slavey, English and French.

A tepee set up on the summit of the rock facing Great Slave Lake bears witness to the ancestral right to this land, assigned through history to the large Aboriginal community.

The artistic work was completed by three Aboriginal sculptors, Sonny McDonald, a Métis from Fort Smith, John Sabourin, a Dene from Fort Simpson, and Eli Nasogaluak, an Inuvialuit from Tuktoyaktuk, who began their work on the site on August 11, 1999, along with the Quebec sculptor Armand Vaillancourt. He invited students from Yellowknife’s schools to participate in the creation: several original designs incorporated in the sculpture come from the imagination of these children.

Traditional art, without losing its identity or characteristic traits, forms a happy marriage with modern art, the whole delivering a strong message of solidarity and confidence in the future. This sculpture is a collective and multicultural masterwork that truly illustrates the solidarity of the local communities.

The project was launched in February of 1997 by 2 Aboriginal artists, Daniel Lamoureux, Director of the Fédération Franco-Ténoise and Armand Vaillancourt. Both artists, also friends, began speculating about the various options regarding design and funding.

The project was funded under the Canada Millennium Partnership Program.

Following a public consultation with area residents and Aboriginal bands, the City of Yellowknife acquired a 30-year lease on a section of McAvoy Rock from Canada. The size of the site was then doubled, with the land eventually being transferred to the Fédération Franco-Ténoise, who was promoting it.

The sculpture was installed in June of 2002.