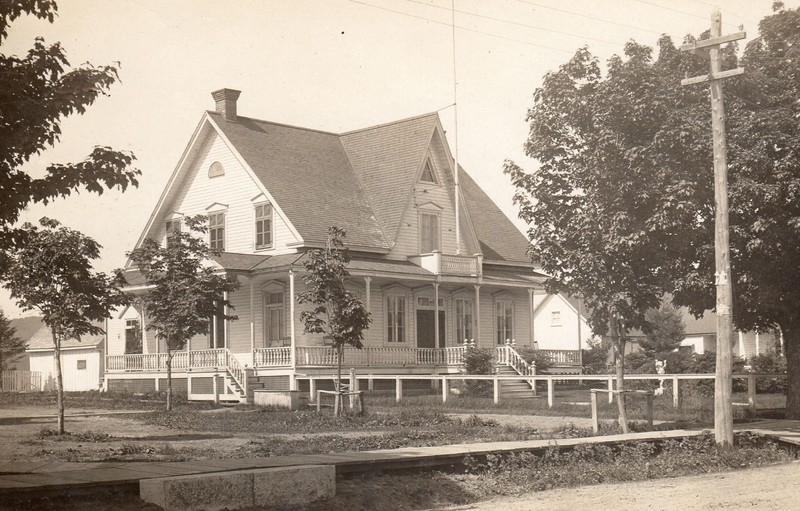 The first Catholic presbytery in the parish was built around 1865. Before its construction, Abbé J.N. Ritchot and Curé Antoine Giguère, the first two parish priests, lodged upstairs of the chapel. During the summer of 1885, the current curé, Théophile Thibodeau, organized a bazaar to fund construction of a new, brick-clad presbytery. The building was destroyed in a fire three years later, taking the life of Father Thibodeau as he tried to fight it. Curé Hétu succeeded him, and undertook the construction of a new presbytery, this time in wood. That building too would be destroyed by fire.

The current presbytery was completed in 1928. The architecture of this imposing building is remarkable, brilliantly integrating a variety of early-20th-century styles. Note the gargoyles designed to carry rainwater from the roof, and the typical covered gallery. The presbytery has been listed as a heritage property by the City of Sainte-Agathe-des-Monts since 1993. 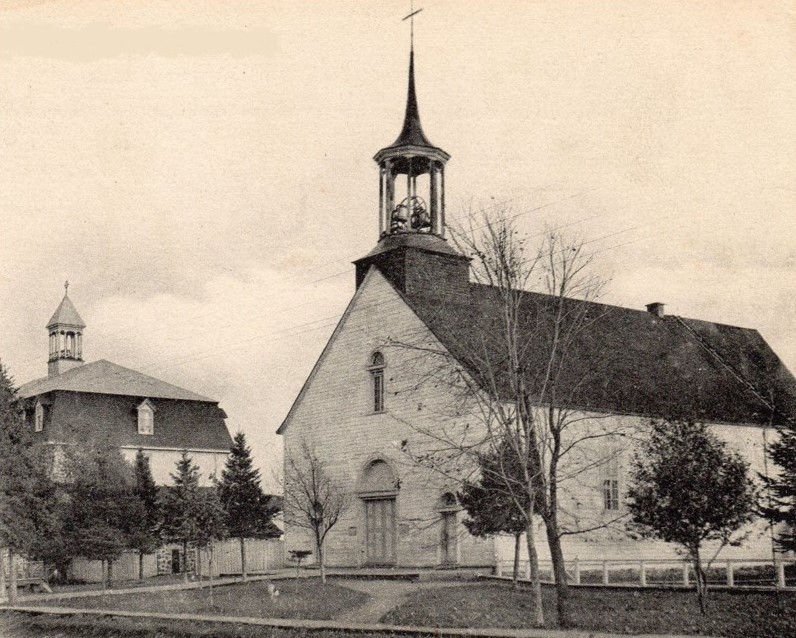 Worshipers were originally served by a mission led by the Curé of Sainte-Adèle, until the Parish of Sainte-Agathe was created in 1861. A larger wooden church replaced the original chapel-presbytery in 1865. Forty years later, with space becoming insufficient to accommodate the growing population, construction began on a magnificent stone church, which was blessed in August 1907.

PHOTO
The first church erected in 1865 with the original Filles de la Sagesse Convent behind. 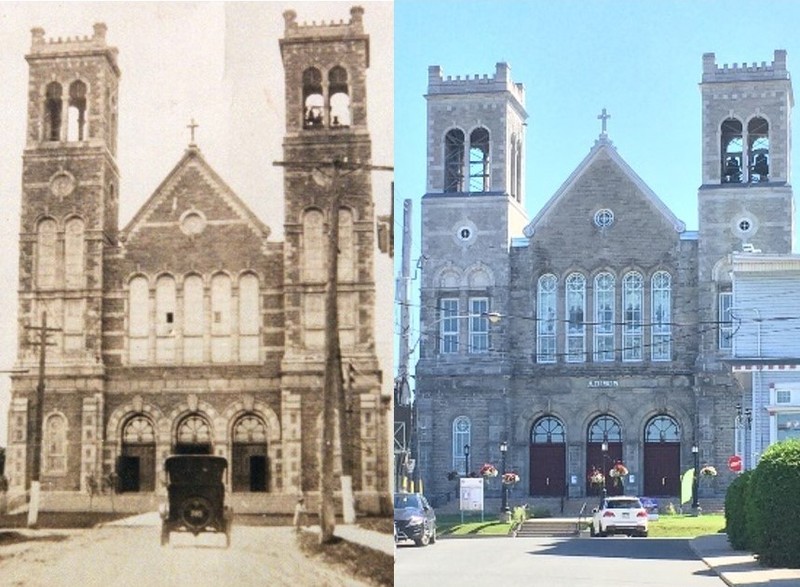 Parishioners wanted it to be the finest church in the North, as beautiful as a cathedral in the hope that it would become the bishop’s see, and in response, architects Gauthier and Daoust of Montreal were apparently inspired by Notre-Dame Cathedral in Paris. Sainte-Agathe Church is indeed reminiscent of the Neo-Romanesque style with its arched windows and crenellated towers.

Many craftsmen from the area helped build the church. The painted ornamentations were entrusted to Toussaint Xénophon Renaud, a renowned church decorator. After the Vatican II liturgical reforms in the 1960s, the paintings were plastered over. In 1930, two Casavant Brothers organs were installed; they were restored in 1980. The painted stained-glass windows, dating from 1954, were designed by Charles Stefanoff, and the stations of the cross are the work of the Bourgault brothers.

Because of structural problems, the towers had to be shortened by 18 feet in 1957, but this did not compromise the appearance of the church, which has been listed as a heritage property by the City of Sainte-Agathe-des-Monts since 1993.

The church has been listed as a heritage property in the municipal registry since 1993. 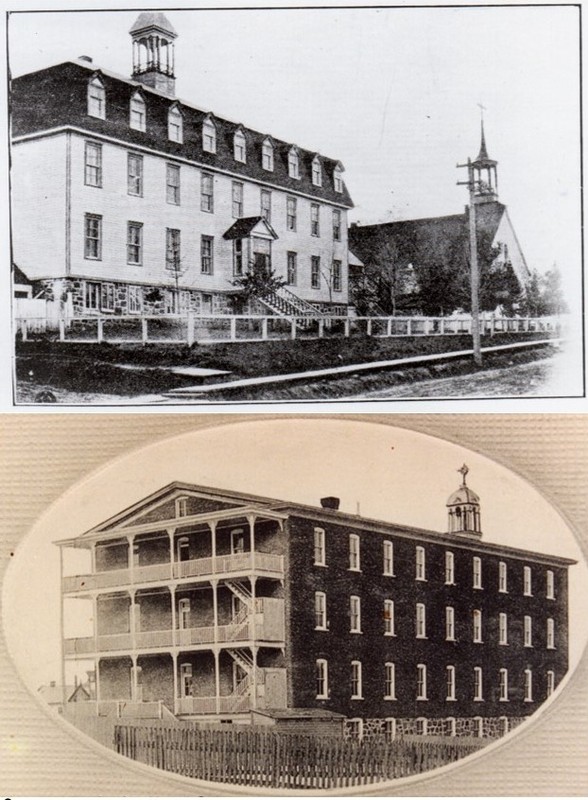 77 Principale Street East
(current site of the Caisse Populaire – civic number not visible from the street)
……….

Built in 1894-95, the area’s first institution for the schooling of young girls was run by the Congregation of the Filles de la Sagesse (Daughters of Wisdom). The convent included dormitories for the boarders and nuns, classrooms, a dining hall, and a chapel. In 1909, the building was destroyed by fire; fortunately, no one died. When rebuilt the following year, the convent welcomed 200 primary and secondary school students. The “cours commercial” (business classes) were also taught.

Even before the education reforms enacted in the mid-1960s, construction had been completed on the Notre-Dame-de-la-Sagesse school, reserved for girls’ primary and secondary school education. Boys still went to school at the Collège Sacré-Cœur.

As the teaching staff gradually became secularized, the Sisters continued to take part in the girls’ education, dispense nursing care, and provide pastoral instruction. But their numbers dwindled rapidly, and the old convent was eventually too large for the small number of nuns who still lived there; it was torn down some ten years after the last few moved out. Sainte-Agathe’s Caisse populaire now stands on this spot. 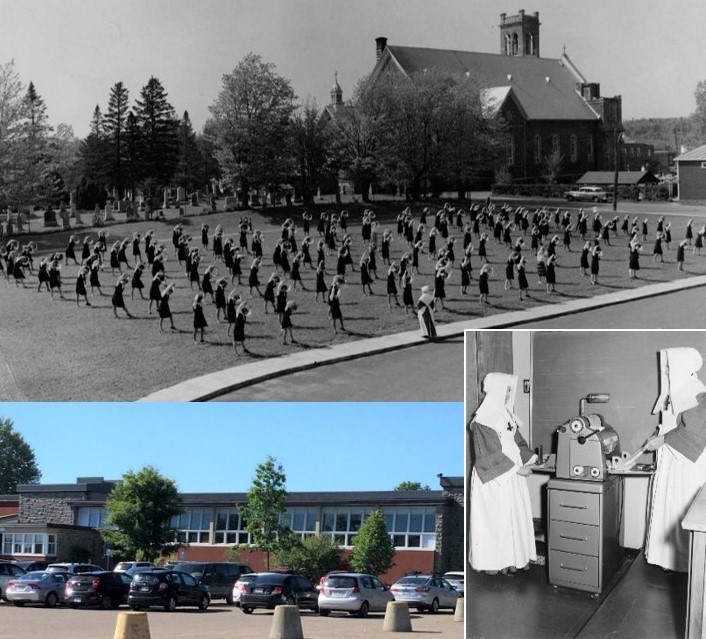 37 Larocque Street
(located behind the church)
……….

Built in 1953, this school was originally run by the Congregation of the Filles de la Sagesse. Only girls attended, at both primary and secondary levels. In 1966, secondary school classes were moved to a new building, and Notre-Dame-de-la-Sagesse was eventually opened to both girls and boys. Today, the school has a population of close to 600 students, some of whom are in special education classes.

More primary schools were built over the years. Students can attend secondary school at the Polyvalente des Monts, or can choose among enriched programs available at other Commission scolaire des Laurentides schools. 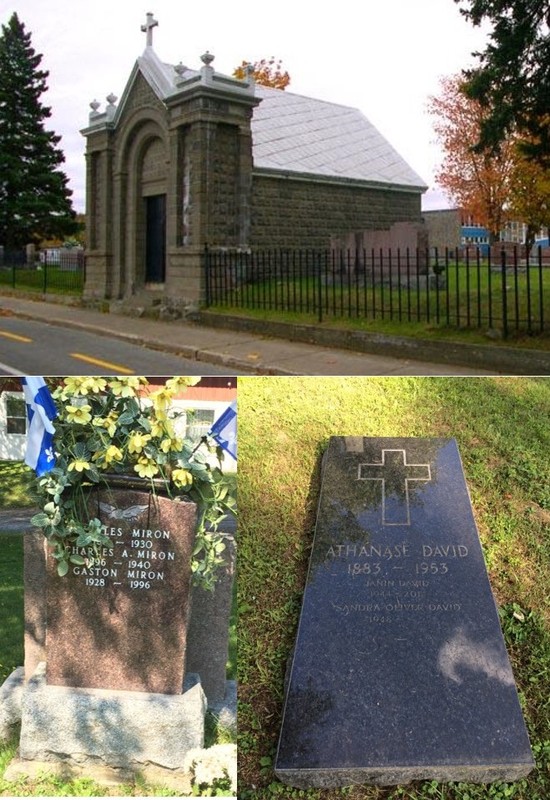 The cemetery includes many old tombstones in remembrance of the town’s first residents.

The first parishioner buried near the original church was Marie Lanthier, on August 6, 1861. In 1893, the cemetery was moved to its current location for lack of space; the bodies in the original graveyard were exhumed and transported to their new resting places. Later, the current church was built on the site of the first cemetery.

The ossuary, which resembled a small church, may have been built at the same time. Abandoned for many years and in a dilapidated state, it was demolished in 2013. As you stroll along the cemetery paths, you can admire a Calvary cross and century-old trees. Well-known figures such as poet Gaston Miron as well as lawyer and politician Athanase David (who was Provincial Secretary of Quebec from 1919 to 1936) are buried here.